As we already mentioned in this Raymarine Wi-Fish review, this unit turns your mobile device into a potent CHIRP DownVision sonar.

Unlike regular CHIRP sonars that produce conical beams that cover a narrow area directly beneath your vessel, the DownVision iteration creates a wide-angle side-to-side and thin fore-to-aft beam. Both options have their advantages: a regular CHIRP can be effective at a wider range of speeds while DownVision performs best at lower vessel speed. However, DownVision provides much better image quality thanks to its higher operating frequency. On top of that, the wider beam also makes it easier to scan larger surfaces more quickly and efficiently. 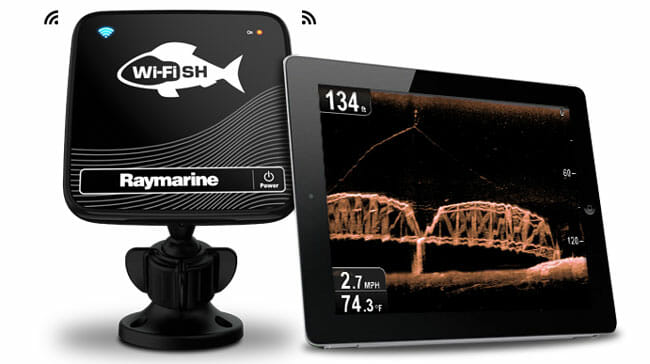 The unit comes with a CPT-DV transducer that is compatible with Dragonfly 4dv. The transducer can be mounted onto your vessel using the provided transom mount. It is made of urethane and its maximum scanning depth is 600ft. If you so choose, you can upgrade the transducer to CPT-70 or CPT-80, but you will not get any reach extension. The provided power cord (13.1ft) can be extended up to 26.2ft without any negative consequences. Going beyond 26.2ft will result in reduced performance.

The manufacturer remains silent when it comes to operating frequencies covered by the main unit and its default transducer, but since it can reach up to 600ft, it definitely cannot hit low CHIRPs, which is expected from a budget-friendly model such as this one.

Raymarine Wi-Fish does not feature any GPS functionality, but there is a way around this without purchasing additional navigation units. Namely, if you already have the Navionics Boating app on your tablet or phone, you can stream the sonar data captured by Wi-Fish directly to the app in real-time and create your own bathymetric chart. Admittedly, this is a rather costly option if you do not already have Navionics.

Raymarine Wi-Fish has one microSD card slot (up to 32GB) and also features dedicated apps for Android 4.0+ and iOS 7+. In order for the aforementioned water-resistance rating to apply, you should keep the card reader door closed at all times to prevent water from getting in and damaging the unit.

Raymarine releases occasional updates for the apps, so make sure to check the store now and again since the app will not function properly (or at all) unless the software is up to date.

The device also allows you to record your sonar scans, rewind to exciting moments, zoom, and save in order to share with friends and other fishers. It comes with wireless connectivity, so it requires a stable Internet connection in order to communicate with your mobile device and stream relevant imaging data on your screen.

As already stated in this Raymarine Wi-Fish review, screen-less fish finders that stream sonar imaging data to your phone or tablet have their sets of benefits and shortcomings. Direct sunlight can be a problem as well as heavy rains and splashes. On the other hand, the absence of a dedicated display drives the price down significantly.

Raymarine Wi-Fish does come with an impressive CHIRP DownVision sonar and a pretty decent transducer that can reach up to 600ft depending on the bottom structure. It does not feature GPS but can be paired with Navionics charts. Finally, since there are no complicated menus and options and the mounting process is relatively easy with all the necessary parts provided with the unit, this device is ideal for beginner fishers or those without previous experience with fish finders.