Raymarine Dragonfly 7 PRO features a 7” display with a pixel matrix of 800 x 480. The aspect ratio is 15:9. The screen delivers excellent visibility regardless of the viewing angle or bright colors and sharp contrasts. The optical bonding LCD technology makes the display much easier to observe in direct sunlight. The user interface can be viewed in 22 different languages. 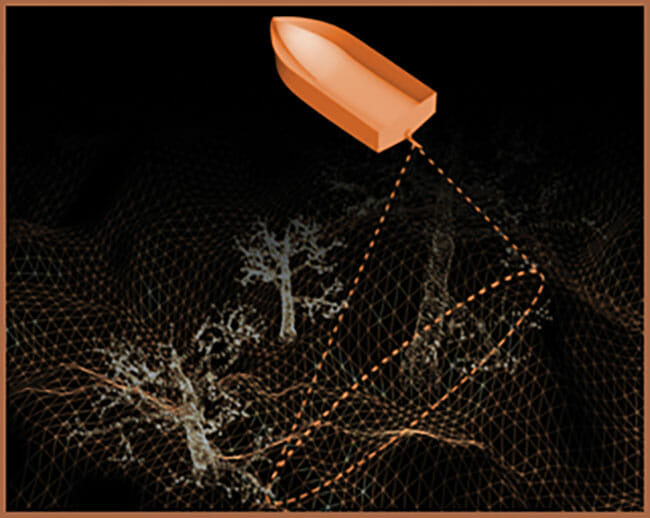 The waterproof rating is IP-X6 and IP-X7, which means the unit can withstand accidental water splashes and heavy rains but also complete immersion in 3.3ft of water for up to 30 minutes without any negative consequences. However, note that it has not been tested against dust, dirt, sand, and other solid objects that could find their way into the main housing.

All Dragonfly units utilize CHIRP sonars for both 2D and DownVision scanning and 7 PRO is no exception. The provided transducer is the CPT-DVS model, which is a transom mount unit with an incorporated temperature sensor. It comes with 20ft of power cable and supports both sonar channels provided by the 7 PRO. For 2D CHIRP, the frequencies are modulated between 170 and 230 kHz and for DownVision, between 320 and 380 kHz. The maximum depth for 2D is 900ft and 600ft for DownVision.

Raymarine Dragonfly 7 PRO is an excellent fish finder/GPS combo that comes with a built-in 72-channel GPS/GLONASS module that provides you with extremely quick and precise fixes while monitoring the overall speed of your vessel. 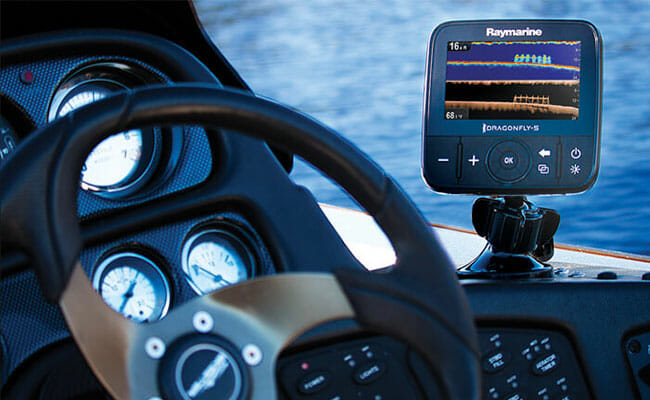 As already stated in this Raymarine Dragonfly 7 PRO review, this particular bundle comes with US Navionics+ charts (E70320-NAG), which means it covers more than 18,000 US lakes, all Canadian lakes available on HotMaps Canada, details on all the great lakes, Canadian 2XG coast, Bahamas, and US 1XG Hawaii and Alaska. The unit is also compatible with C-MAP by Jeppesen, Navionics Gold, HotMaps, SonarChart, and LightHouse vector and raster charts.

As we already mentioned in this Raymarine Dragonfly 7 PRO review, the unit comes with Wi-Fi connectivity (unlike its predecessor), which allows you to stream the scanning data onto your smartphone or tablet using the Wi-Fish app available on Google Play and iTunes. This is especially helpful since it allows you to take snapshots and record scanning sessions. Note that the unit itself does not feature sonar recording.

Apart from this, Raymarine Dragonfly 7 PRO also comes with a microSD card reader with one slot primarily intended for software updates, data transfer, and map upgrades. The unit does not feature any NMEA ports.

Raymarine Dragonfly 7 PRO with Navionics+ charts is an excellent fish finder/chartplotter combo that comes with both CHIRP 2D and CHIRP DownVision sonars paired with a potent GPS module and the CPT-DVS transducer. Its Wi-Fi capability allows you to stream the scanning data onto your smartphone or tablet, which somewhat offsets the fact that it does not feature sonar recording. The unit does not come with any NMEA ports, but the price is adequately reduced due to this shortcoming.

Bottom line, Raymarine Dragonfly 7 PRO is an excellent option for both freshwater and saltwater excursions and it is a perfect fit for both small fishing boats and large vessels. However, if you prefer kayaks or canoes, we would recommend a smaller unit like Dragonfly 4 PRO or 5 PRO, for example.