Humminbird PiranhaMAX 4 Di comes with a 4.3” 256-color TFT display with a pixel matrix of 480 x 272. The unit features an LED backlight, which provides users with better readability at night or in direct sunlight. Note that there is no touchscreen functionality, so you control the display using the implemented keypad. Finally, the unit does not have a split-screen feature.

The device is IP-X7 waterproof, which means it was built to withstand rain, accidental splashes, and even complete immersion in 3.3ft of water for 30 minutes. On the other hand, it has not been tested against dirt, dust, and other outside influences.

Humminbird PiranhaMAX 4 Di comes with the XNT 9 DI T transducer that already features a transom mount as well as a temperature sensor. As indicated by its name, the transducer works with both 2D and Down Imaging sonars. 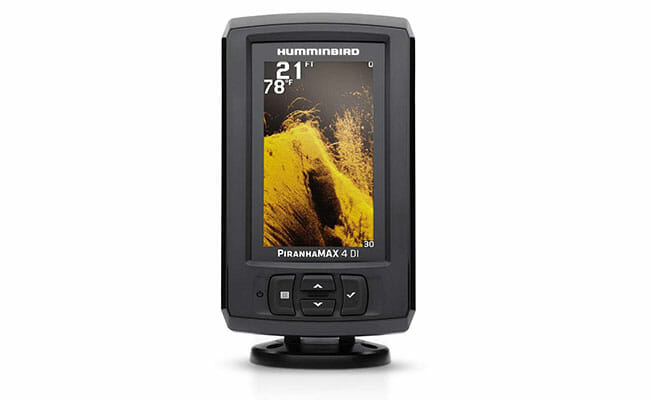 Speaking of sonars, the device features 2D (DualBeam) and Down Imaging. For 2D, it utilizes 200 and 455 kHz with conical beams angled at 28° and 16°, respectively. Even though it does not offer exceptional coverage, this sonar still allows you to scan underwater structures and fish targets. Note that the unit can use only one beam at a time.

The Di sonar, on the other hand, uses a thinner, wider beam, angled at 75° for 455 kHz, which is its only channel. Even though it does not feature the CHIRP tech, PiranhaMAX 4 Di does come with 2.5” target separation, which is pretty good for such a small unit. The Di sonar is excellent for identifying underwater structures and differentiating between vegetation and fish. Since this is a relatively small unit, its overall reach is quite limited, so hitting 50 kHz is not an option with this device.

The maximum reach of this unit is 320ft for Di and 600 for 2D Imaging. You can receive viable readings at about 30 MPHm, but the manufacturer recommends going between 1 and 6 MPH for the best results. As far as traditional sonar functions are concerned, there are Structure ID, Fish ID+, Bottom View, and numerous alarms.

When it comes to connectivity, Humminbird PiranhaMAX 4 Di does not offer any traditional options. In other words, it does not feature any NMEA ports, Ethernet capabilities or microSD card readers.

Humminbird PiranhaMAX 4 Di is a small, budget-friendly fish finder designed to fit the needs of casual fishers with smaller fishing vessels. In other words, it is a few notches above basic since it does provide you with two different sonars. The unit also features a decent transducer, so you do not have to purchase one separately.

Given its maximum depth and capabilities, this device is primarily intended for inland fishing using kayaks, canoes, and similar small vessels. Its small dimensions make it extremely portable, so you can carry it with you if you are not an owner but rely on rentals.