Humminbird PiranhaMax 197c features a rather small 3.5” color display with a resolution of 240 x 320 pixels. The color palette goes up to 256 colors and the screen features an LED backlight, which makes images much easier to observe at night or in direct sunlight. 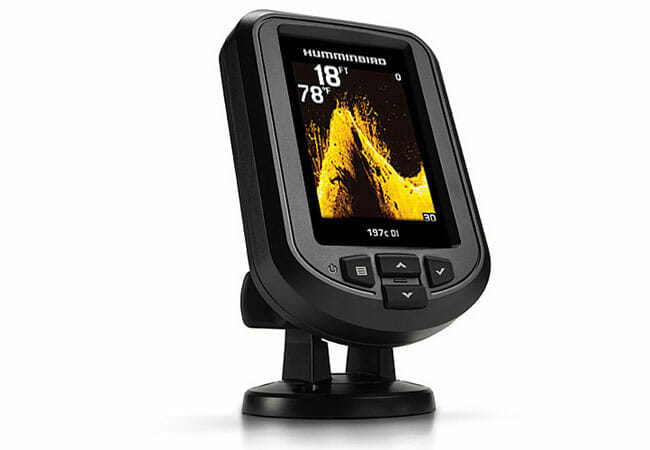 The waterproof rating for this device is IP-X7, which means it should be able to withstand water splashes, rain, and even total submersion in 3.3ft of water for up to 30 minutes. However, since it features an “X” in its rating, we know that it has not been tested against the entry of solid objects like dust or sand, for example.

Humminbird PiranhaMax 197c does not come with the touchscreen functionality and can only be operated via the 4 buttons located underneath the screen.

Humminbird PiranhaMax 197c features a dual beam 2D sonar capable of covering 200 and 455 kHz. However, since the sonar is only dual beam and NOT dual beam plus, you can either use one beam or the other.

The unit features the XNT 9 28 T transducer, which covers both frequencies and comes with a transom mount. It also has a sensor capable of measuring topwater temperature and features 20ft of power cable.

PiranhaMax 197c only uses a standard 2D sonar and is not capable of down imaging technology. If you are looking for a similar model with this functionality, you might want to take a look at PiranhaMax 197c Di. Both sonar beams are conical and operate at 28° for 200 kHz and 16° for 455 kHz.

With its default transducer, the unit can reach up to 600ft, which is rather impressive for such a small device. Even though it can provide you with a clear bottom reading at up to 30 MPH, you will get the optimal imaging at 5-6 MPH.

PiranhaMax 197c comes with numerous standard sonar features, including Fish ID+, Structure ID, Bottom View, WhiteLine, and 3 different alarms (battery, fish, and depth). The fish alarm allows you to choose between small, medium, and large fish (or all at once) and it will notify you when the unit detects a fish that matches the set parameters.

PiranhaMax 197c is a pretty basic fish finder ideal for beginners and experienced kayak/canoe anglers. It comes with a traditional dual beam 2D sonar that covers both 200 and 455 kHz (but not both at the same time) and the XNT 9 28 T transducer that is able to cover both frequencies.

The maximum depth is 600ft, which also makes this unit viable for off-shore fishing (if you remain close to the shore), depending on the bottom structure, of course.