Garmin echoMAP Plus 73sv comes with a 7” WVGA color touchscreen display that allows you to operate the unit just like a regular tablet with the familiar tap, drag or pinch commands. This is one of its main advantages over the older echoMAP CHIRP 73sv. Alternatively, you can also use the keypad located on the right side of the main housing.

The screen measures 6.1” x 5.5” x 2.0” and has a pixel matrix of 800 x 400. The adjustable LED backlight enables you to observe readings perfectly even at night or in direct sunlight.

The waterproof rating is IP-X7, which means the device was built to withstand accidental splashes, heavy rain, and submersion in 3.3ft of water for up to 30 seconds. The “X” in the rating means that the unit has not been tested against the entry of solid objects like dust and sand, for example.

You also have a couple of split-screen options at your disposal with up to 3 apps shown at the same time. The user interface is very intuitive and beginner-friendly while also allowing more experienced users to customize their home screens to fit their needs.

This Garmin echoMAP Plus 73sv bundle comes with the CV52HW-TM transducer that covers all the implemented sonars: 2D CHIRP, SideVü, and ClearVü. It is a 12-pin transducer with a transom mount, temperature sensor, and 20ft of power cable.

For the CHIRP 2D sonar, the transducer utilizes a single high-frequency beam with CHIRP modulation intervals between 150 and 240 kHz with a conical beam covering 24-16°. The unit is capable of emitting other 2D frequencies, including 83, 77, and 50 kHz. 77/200 and 50/200 transducers can also unlock the unit’s dual-frequency capabilities. 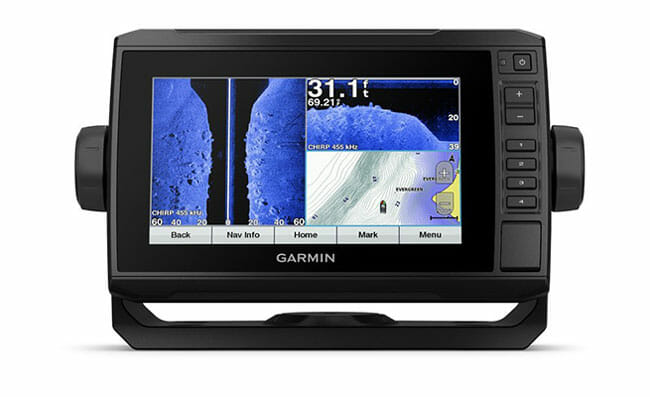 When it comes to SideVü and ClearVü, the implemented transducer can cover 455 and 800 kHz with CHIRP modulation intervals between 425-485 kHz and 790-850 kHz. Note that the unit is also capable of operating at 260 kHz, which makes it compatible with a range of different transducers with extremely thin fore/aft beams (1-2°). Using them will extend the overall reach of the side beams by hundreds of feet.

CV52HW-TM can reach the depth of up to 800ft with its 2D CHIRP and 500ft with sv/cv sonars. If you pair the unit with a 50 kHz capable transducer, you will extend the overall reach to 2,300ft. Note that the device is compatible with Panoptix sonars (it features one Panoptix port), which are, however, not usable with its default transducer.

Garmin echoMAP Plus 73sv comes with the same built-in GPS module featured in 63cv and 74cv. We are talking about a 5 Hz GPS receiver with 5 updates per second. Apart from showing the coordinates (lat, long) of a specific waypoint or your vessel, it will also calculate the speed of your boat, which means you will not need an additional speed sensor.

The device comes with the US LakeVü charts that feature over 17,000 lakes, 13,000 of which have 1ft contours. It also gives you general roads and bridges, interstates, fishing areas, boat ramps, marinas, camping grounds, and all other POIs. These charts come with the Shallow Water Shading functionality, which means you will be able to assign minimum depths and observe them quickly on the main screen.

Having said that, the included charts are primarily dedicated to inland fishing, but you can always install some top-tier off-shore charts like BlueChart g2 HD, for example. The LakeVü HD Ultra upgrade is also available if you want a more detailed overview of inland lakes. Garmin echoMAP Plus 73sv is incompatible with Navionics charts.

Finally, the unit also comes with the Quickdraw Contours feature in case your lake is not already covered as well as the SailAssist functionality.

Garmin echoMAP Plus 73sv features NMEA 0183 ports as well as NMEA 2000 networking options. It also comes with built-in wireless connectivity, which allows you to sync it with your tablet or smartphone, access the OneChart features, connect to ActiveCaptain, receive notifications directly on your unit, and much more.

Garmin echoMAP Plus 73sv is a perfect fish-finding (and chartplotting) solution for inland fishing trips and off-shore expeditions when paired with Garmin’s coastal charts and a better deepwater capable transducer. It works well with all types of boats except extra-small kayaks and canoes.

The unit features an LED-backlit 7” display and comes with a standard 2D CHIRP sonar as well as sv and cv sonars paired with a built-in GPS and the preloaded US LakeVü charts. The bundle comes with the CV52HW-TM transducer, but you can also pair it with Panoptix. Lastly, it features built-in wireless connectivity and is compatible with Garmin’s ActiveCaptain app.